Severe scar contracture can easily occur after a burn injury in the neck region, resulting in a functional decline that affects daily living. Because a hard scar tissue in the neck widely extends into the anterior chest wall in patients with severe burns, excessive forces should be exerted to extend the neck. We found that the impact force by the weight of the breast sometimes intensifies contracture tendency and leads to the recurrence of the contracture in women. To date, medical reports have paid little attention to this. We performed reduction mammoplasty on 3 female patients with neck burn scar contractures before the release of neck scar. About 200 g of tissue were removed from each breast according to the McKissock technique. In 1 case, the skin was moved to the axilla as a skin flap to release the contracture. The remaining neck scar contracture was then reconstructed with a local flap or free flap. In all 3 patients, mammoplasty and neck reconstruction were performed without complications and with good results. No recurrence of contracture occurred. Reduction mammoplasty in advance reduced the level of neck scar contracture and allowed for a variety of reconstruction options, including local skin flaps, and was also effective in preventing postoperative recurrence.

Neck burn scar contracture is a common complication after severe burn injury. Severe neck contracture limits activities of daily living, such as speech and eating; it frequently leads to the inability to close the mouth, drooling, and poor oral hygiene.1,2 Various reconstructive methods such as skin grafting, Z-plasty, local flaps, and pedicled or free skin flaps have been developed for the treatment of neck scar contracture and deformity.1-8

Patient 1
A 35-year old woman had a flame burn with 35% of total body surface area (TBSA), including the face, neck, anterior chest wall, both breasts, both upper limbs, and abdomen. All wounds were treated using skin grafting 4 times and healed. However, subsequent severe neck contracture accompanied by mentosternal adhesion led to her inability to close the mouth (Figure 1, A and B). Full-thickness skin grafts for the lower lip (at 6 months after injury) and free latissimus dorsi musculocutaneous flap transfer for the neck (at 10 months after injury) were applied. Although the neck contracture improved, it gradually recurred. Another attempt to treat the contracture was conducted by applying skin grafts to the chin, 1.5 years after injury, but contracture recurred, and neck extension was inhibited.

Reduction mammoplasty using the McKissock technique was performed; 220 g and 230 g were removed from the left and right breasts, respectively. Afterward, the contracture improved, and no recurrence appeared within a 10-year postoperative follow-up (Figure 1D).

Patient 2
An 81-year old woman had a flame burn with 14% of TBSA, including the face, neck, and right upper limb. Injuries of the anterior chest wall and breasts were averted. Debridement and split-thickness skin graft (STSG) procedures were performed on the neck 18 days after injury; severe scar contracture later occurred. Although the patient did not have an injury to the anterior chest wall, the breasts remarkably dropped because of advancing age, and the degree of the contracture increased (Figure 2A). When the breasts were supported with underwear, the contracture remarkably improved.

The patient received simultaneous bilateral reduction mammoplasty and skin grafting to release the axillary contracture in an attempt to release the neck scar contracture; 250 g and 240 g were removed from the left and right breasts, respectively, using the McKissock technique (Figure 2B). The neck scar contracture improved and could be treated with local skin flaps combined with the V-Y advancement technique at a future date (Figure 2C). The patient had no recurrent neck contracture during a 3-year postoperative follow-up (Figure 2, Figure 2D and E).

Patient 3
A 37-year old woman had a flame burn with 26% of TBSA, including the neck, chest, abdomen, and both upper limbs. Debridement and STSG were performed 4 times, and all of the wounds healed. However, severe extensive contracture appeared in the neck and anterior chest wall (Figure 3A). Contracture remarkably improved when the breasts were supported with underwear.

We performed bilateral reduction mammoplasty before the release of the neck scar contracture; 210 g and 200 g were removed from the left and right breasts, respectively, and sutured using rotation flaps. Some of the skin area of the breasts was simultaneously elevated as local skin flaps were transplanted, resulting in a skin defect after both folds of the axillary contracture were released (Figure 3B). The neck scar contracture was treated with free anterolateral thigh flap 10 months after the reduction mammoplasty; the patient had a good recovery with no recurrence during a 5-year postoperative follow-up (Figure 3, C and D)

A skin graft is the most popular technique for treating neck burn scar contracture.2,3 In addition, Z-plasty and local flaps can be used for minor contracture4-6; pedicled or free skin flaps are used for severe or extensive contracture.1,7 Furthermore, various thin flaps have recently been developed, resulting in improved aesthetical quality.8 Other well-examined strategies for neck burn scar contracture have also been reported.9,10 However, the medical literature has paid little attention to the influence of the impact force by the weight of the breast on neck contracture. To our knowledge, there have been some cases where contracture could be improved by skin grafting or skin flaps, but contracture repeatedly occurred. We found that tendency for recurrence in women is higher.

With regard to reduction mammoplasty, various techniques, including inferior, lateral, superior, and medial pedicle patterns, have been developed as a single pedicle or bipedicled flaps, considering vascular reliability.11-15 There are also diverse incision designs and resulting scars; when we perform reduction mammoplasty on a patient, we determine the technique by considering the sufficient amount of volume of the adipose tissue to be removed, the ease of the procedure, and the length of the operation time. Moreover, consideration should also be given to the compromised vascular reliability of the breast skin if burn injuries and scars occur.16-18

Risk of poor blood circulation includes necrosis of the flap and nipple-areolar complex and poor wound healing. Some reports have indicated points to be noted when performing reduction mammoplasty for postburn breast deformities.17,18 Making the pedicle as wide and safe as possible helps to preserve maximum blood supply. Limited undermining of the deep layer secures blood flow.16 Although we usually use the McKissock technique for our patients, techniques should be used properly, depending on each situation and degree of contracture, injured body surface area, and volume of the breasts. In addition, most patients also have postburn scar contractures on other adjacent body surface areas, such as the anterior chest wall or axillae. We recommend that the skin removed by reduction mammoplasty can be used as a skin flap or skin graft when these scars are released simultaneously.

We concluded that severe scar contracture in the neck and anterior chest wall easily recurred once the contracture was completely released and reconstructed. This tendency is shown in women, with dropping of the breasts considered as the cause. In conclusion, a combination of reduction mammoplasty and neck contracture release seemed to be effective to prevent recurrence of the contracture, and surgery for neck scar contracture could be minimized in some cases. 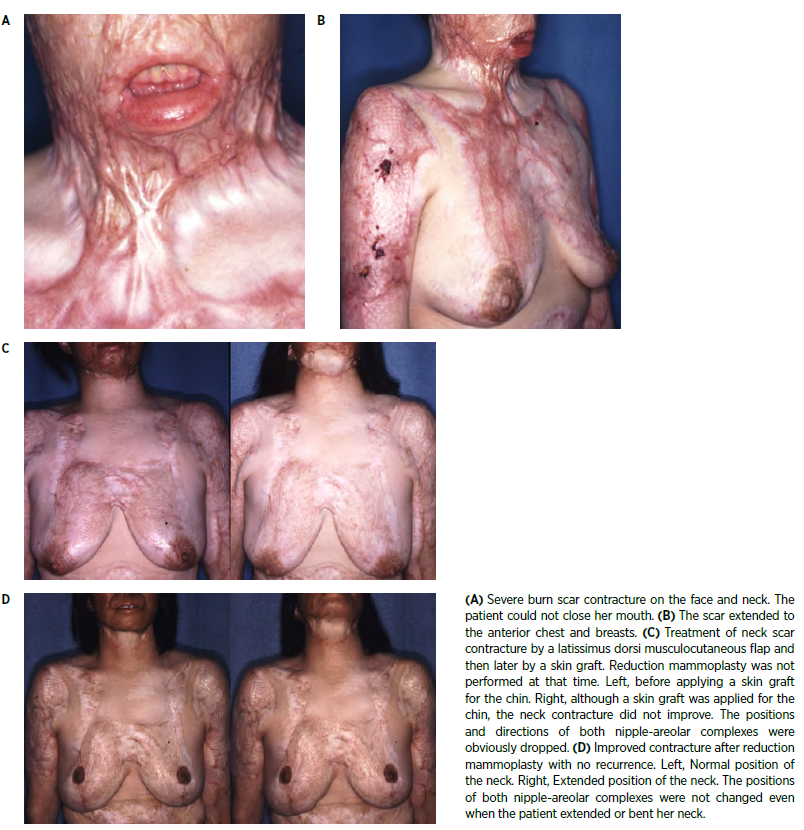 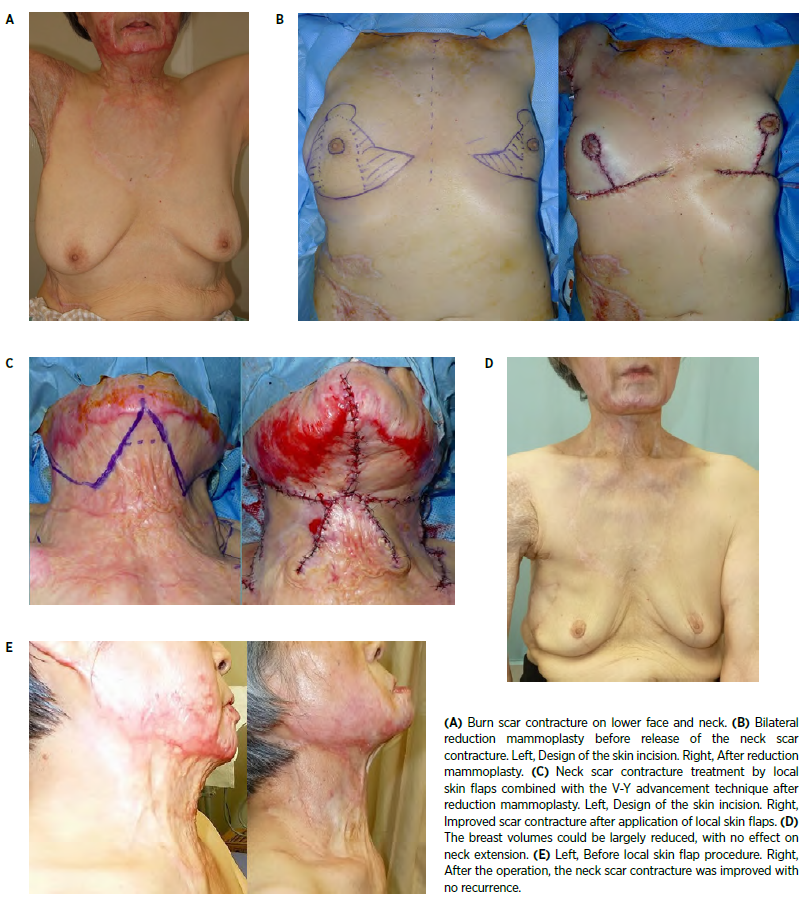 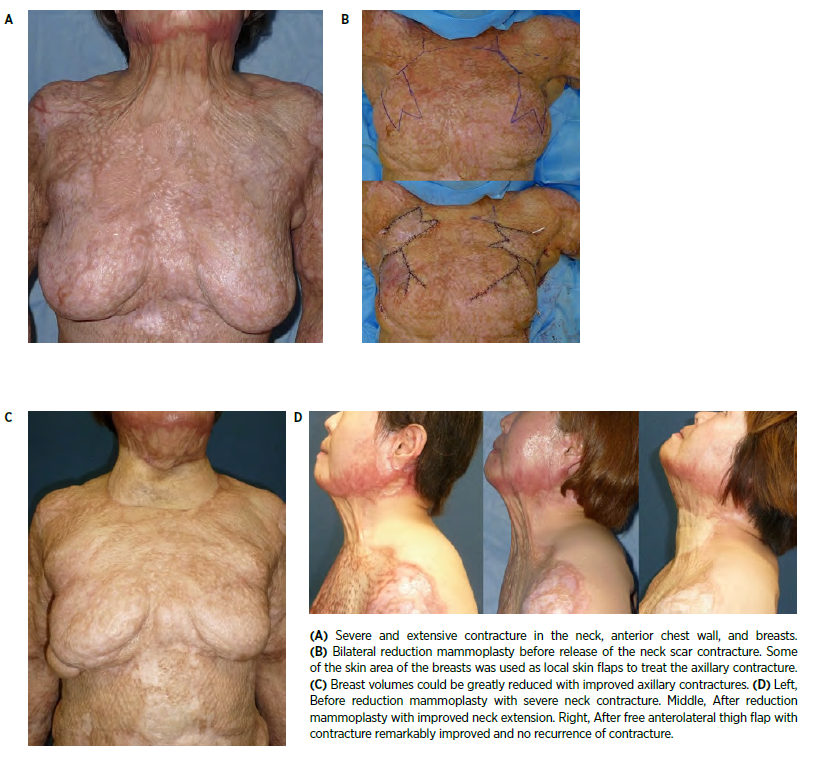