Necrotizing fasciitis more often occurs in patients with diabetic vasculopathies, in those who are immuno-compromised, or in those exposed to blunt or penetrating trauma. Aggressive debridement and salvage of the relevant extremity are important in the treatment to prevent patients from entering sepsis. In this case report, we describe a 66-year-old male patient with diabetes mellitus who developed necrotizing fasciitis after a mosquito bite.

INTRODUCTION
Necrotizing fasciitis is a progressive disease that develops secondary to infection caused by polymicrobial or invasive bacteria, such as streptococcus and varicella in the skin and subcutaneous tissues. It is more common in patients with diabetic vasculopathies, those who are immunocompromised, or those exposed to blunt/penetrating trauma. Aggressive debridement and salvage of relevant extremities are important in the treatment to prevent patients from entering sepsis. In this case report, we describe a patient with diabetes who developed necrotizing fasciitis after a mosquito bite.

CASE REPORT
A 66-year-old male patient was consulted to our clinic by the emergency department because of redness and tissue loss in his left leg. The patient described that, while he was having a picnic by the lake 3 days earlier, he had a mosquito bite on the back of his left leg. He stated that redness in that area gradually increased, with blackening in the middle and with his leg gradually swelling. The patient’s history showed that he had uncontrolled diabetes mellitus for more than 20 years and congestive heart failure for 3 years.

On physical examination, an 8 × 5-cm lesion with eschar in the center and diffuse hyperemia toward the periphery was visible in the posterior left leg (Figure 1). There were two 2 × 1- and 3 × 1-cm ulcerated lesions with hemorrhagic lesions on his contralateral extremity, which had developed after the bite. The patient’s body temperature was 37.8 °C in the axilla. The patient was hospitalized because of high serum C-reactive protein level (178.6 mg/L), leukocytosis (29.87 thousand/mL) in hemogram, and poor general condition. The patient’s lesion was marked. Empirical piperacillin tazobactam plus teicoplanin treatment was started after consultation with the infectious diseases department.

On the next day, we observed that the area of hyperemia increased and the necrotic area was enlarged. The patient was started on emergency debridement because of consideration of necrotizing fasciitis. During surgical debridement, debridement included gastrocnemius muscle fascia (Figure 2). We observed that the muscle tissues were healthy. The patient’s wound was left open, and a dressing was applied that was irrigated with hypochlorous acid twice per day.

During patient follow-up, we observed that wound granulation increased, blood biochemistry improved, and peripheral hyperemia decreased within 1 week. On day 10 of hospitalization, the patient underwent reconstruction by taking a partial thickness skin graft from the lateral side of the same extremity (Figure 3). In the postoperative first month, a second split thickness skin grafting procedure was performed for remnant areas. No problems were observed in the follow-up, and the patient was discharged with recommendations (Figure 4).

There are 3 clinical stages of necrotizing fasciitis according to classification from Wong and Wang.7 Hyperemia and swelling are seen in stage 1 (early phase). Blisters and induration are seen in stage 2 (intermediate phase). Dark skin necrosis, crepitations, and hemorrhagic blisters are pathognomonic for stage 3 necrotizing fasciitis (late phase). Our patient was admitted to our department at stage 3 according to Wong and Wang classification.8 Predisposing factors are diabetes mellitus and immunosuppression in most cases.9 Our patient had undiagnosed diabetes mellitus before admission, which could have led to progressive necrosis.

Another scoring system is the Laboratory Risk Indicator for Necrotizing Fasciitis (LRINEC) based on laboratory findings to diagnose NF. Scores that are >8 indicate a high risk of necrotizing fasciitis, and urgent debridement is recommended.10 According to LRINEC, our patient’s score was 10 (Table 1).

If not quickly diagnosed and treated, necrotizing fasciitis can result in tissue destruction, severe sepsis, and death. The aim of surgical intervention is to control the progression of necrotizing fasciitis and the diffusion of bacterial toxins by removing infected and dead tissues such as skin, fascia, and muscle. Amputation is not a rare treatment option for lowering mortality in patients with advanced necrotizing fasciitis of extremities.11 Ahn and colleagues reported that amputation rates were lower in experienced centers involved in diabetic limb salvage procedures.12 Similar to that report, we managed to save the extremity with urgent debridement and proper wound care. We also consulted the patient to endocrinology and nephrology for systemic regulation of metabolic parameters.

There are 2 types of necrotizing fasciitis. Type 1 is polymicrobial and usually occurs in adults with chronic disease, with an average of 4 pathogens in culture. Type 2 occurs only in the mostly healthy, for example, pediatric populations, and is caused by group A streptococci. The gold standard diagnostic method is frozen examination of infected tissue taken during surgical exploration. Broad-spectrum antibiotic regimens are recommended in case of suspected necrotizing fasciitis because of polymicrobial etiology.13 Although tissue biopsy results were negative, we started antibiotic treatment as an adjunctive treatment in our patient. The wound remained open after debridement to observe progressive necrosis. However, necrosis was not advanced, and reconstruction was performed with a split thickness skin graft after granulation formation formed over the muscle.

CONCLUSIONS
Mosquito bites can cause necrosing fasciitis of the extremities in patients with diabetes and immunosuppression. The diagnosis of necrotizing fasciitis requires suspicion. Early surgical intervention, broad-spectrum antibiotic treatment, and a multidisciplinary approach are crucial for limb salvage and to treat life-threatening consequences. 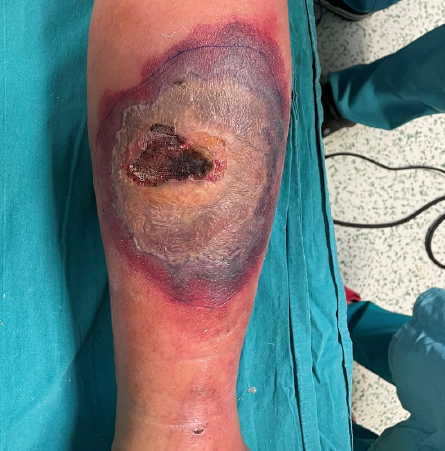 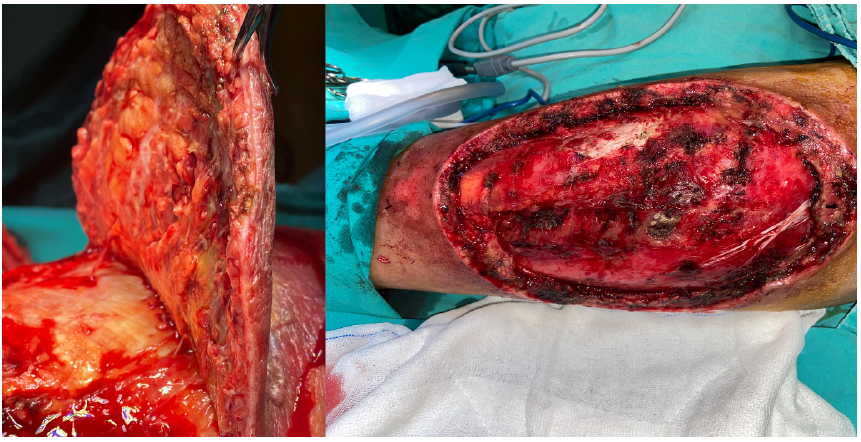 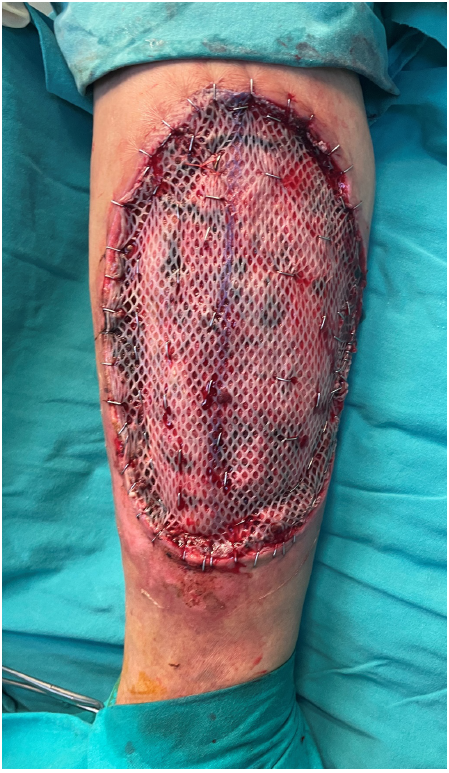 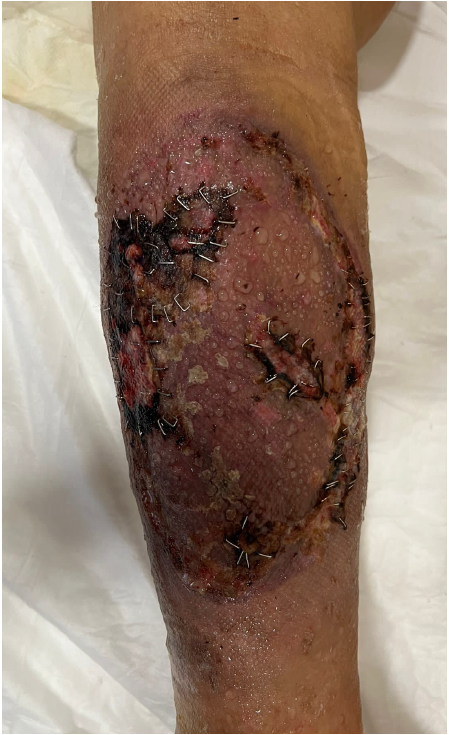 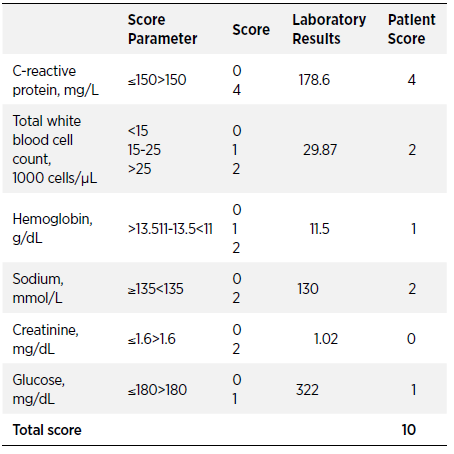