Several manifestations of inflammatory skin reactions have been described. Toxic epidermal necrolysis is an acute skin inflammatory reaction. It is generally triggered by upper respiratory tract infections or by medications such as nonsteroid anti-inflammatory drugs, antibiotics, and anticonvulsants. It is associated with a significant mortality of 30% to 50% and long-term sequelae. Here, we present 2 cases of toxic epidermal necrolysis who were treated by a multidisciplinary team involving burn professionals.

Several manifestations of inflammatory skin reactions have been described, and Stevens-Johnson Syndrome (SJS) and toxic epidermal necrolysis (TEN), also known as Lyell syndrome, are some of the most severe forms. For years, it has been difficult to draw a boundary between SJS and TEN; therefore, they have been considered a disorder continuum that differ only in the degree and severity of skin detachment, with SJS affecting <10% of the total body surface area (TBSA) and TEN involving >30% of the TBSA.1 Many cases initially diagnosed as SJS progress a few days later to an extensive epidermolysis by confluence of individual lesions. Toxic epidermal necrolysis is characterized by massive keratinocyte apoptosis,2 and the reaction is generally triggered by medications such as antibiotics, anticonvulsants, and nonsteroidal anti-inflammatory drugs; upper respiratory tract infections; and, in rare instances, vaccines. It is a rare, self-limited, and life-threatening condition, with an estimated incidence of 0.4 to 1.9 cases per million population per year worldwide,3 and a significant mortality of 30% to 50%.1-4 It can present with relatively common and frequently severe long-term sequelae.4 Because of the severity of skin reactions in these patients, similar to major burns, patients need expert comprehensive care and are often referred to burn centers. Here, we present 2 cases of TEN treated at our burn center in Ankara, Turkey.

Patient 1
A 51-year-old man who had been treated for chronic inflammatory demyelinating polyneuropathy for 32 years was referred to our burn center from another medical center. His daily medications included an unknown anticonvulsant, deflazacort, glycosaminoglycans, and ginseng. Drug compliance was satisfactory, and he had experienced no adverse effects to therapy until 2 weeks before being admitted to our hospital. A few bullous skin lesions appeared on his trunk, and these lesions were initially diagnosed and treated as an erythema multiforme at another medical center. During this time interval, the bullous skin lesions spread up to 75% of TBSA, and corneal and intraoral lesions also appeared. Nikolsky sign was positive. He was referred to our burn center for his need of meticulous wound care with a Severity-of-Illness Score for Toxic Epidermal Necrolysis (SCORTEN) of 4, which predicted a mortality rate of 58.3%. The patient was isolated, received intravenous hydration and enteral and parenteral nutritional support, and was started immediately on systemic antibiotherapy. The daily medication was reviewed and adjusted, discontinuing potentially culprit drugs. At the same time, corticosteroid therapy and intravenous immunoglobulin (IVIG) were given. Silver sulfadiazine was used for wound care with daily wound dressing changes (Figure 1). No microorganisms were detected in the blood or in swab cultures from the skin lesions during his hospital stay. The wounds reepithelialized in 14 days, the corticosteroids were gradually tapered, and the patient was discharged uneventfully. In follow-up of 10 years, no serious sequelae of TEN were observed except for hyperpigmentation and hypopigmentation in some wound sites.

Patient 2
A healthy 4-year-old boy was admitted to the pediatric emergency room with bullous skin lesions that appeared 3 days before admission. The lesions were initially limited to the lips and hands, and SCORTEN was 2 when he was hospitalized. The boy’s medical history and laboratory work-up did not reveal any recent infection or medication use that could have triggered the skin reaction. The patient was transferred to the pediatric intensive care unit as the bullous lesions rapidly extended and progressed into a generalized erythematous rash with mucosal involvement characterized by conjunctivitis and intraoral lesions. At this time, his SCORTEN increased to 3. The histopathological changes indicated lesions similar to erythema multiforme. He was isolated, received intravenous hydration and enteral nutritional support, and was given systemic antibiotic therapy. Steroid and IVIG therapy were also given. His denuded TBSA was 30% when admitted to the intensive care unit. After admission, extension of bullous skin lesions increased up to 60% TBSA over 3 days. After 3 days of silver sulfadiazine treatment, proper wound care was continued with hydrofiber wound dressing consisting of soft nonwoven sodium carboxymethylcellulose fibers integrated with ionic silver (Aquacel Ag). For the lesions inside and close to the oral cavity, gentian violet was used and topical antimicrobial agents with natural eye liquid solutions were used for protection of eyes. The boy’s wounds were epithelized step-by-step, and he was discharged 31 days after admission (Figure 2). The latest epithelization was observed on his feet and hands. Over a follow-up period of 2 years, no sequelae due to TEN were observed except for hyperpigmentation and hypopigmentation in some wound sites.

DISCUSSION
These 2 cases illustrate the complexity of inflammatory skin disorders and how a case of SJS can rapidly progress to TEN. Once diagnosed, the management of TEN focuses mainly on supportive care, wound management, and some adjunctive medications. Because of its rare nature, there is a lack of prospective, randomized controlled trials that may provide a better understanding and new management strategies. An animal model that reliably mimics human disease does not exist.

Despite the high mortality rate associated with TEN, the 2 patients that we reported here experienced complete resolution of their symptoms with remarkable skin regeneration, even when the adult patient presented with a high SCORTEN with a predicted mortality of 58.3%. Our experience agrees with a recent study that showed how SCORTEN may overestimate mortality of patients with TEN.5 These discrepancies are most likely due to the advancements and improvements in wound care, supportive care, and intensive care. The different treatment protocols may affect the prognostic ability and generalizability of SCORTEN since this system was created on the basis of a patient database collected since 1979 and a subsequent validation performed on a series of patients in 1998.5

Because of the significant epidermal loss described as a burn-like condition, early transfer to burns units or involvement of burn teams in treatment can improve outcomes and survival, reduce infection and sepsis risk, and shorten hospital stay. As previously reported, treatment modalities for TEN differ between burn centers and nonburn centers.6 Burn centers are experienced and burn teams are capable of estimating and managing fluid needs and systemic requirements and supportive approaches for these patients. These patients will benefit from well-judged critical care, early debridement, and meticulous wound care provided at a multidisciplinary setting led by a team at a burn center with experience in the management of massive skin loss and its sequelae. The favorable outcomes of our 2 patients may be the result of our multidisciplinary approach.

There is no consensus on the optimal dressing strategy for these patients, but the main goal is to prevent infection and desiccation of the exposed dermis, because loss of protective barriers from denuded skin and damaged mucosa predispose the patient to severe complications such as sepsis, shock, and respiratory distress.7 Basic wound care principles are required, and isolation is essential because of risk of invasive wound infections, which may worsen outcomes with wound sepsis. In the 2 cases reported here, we proceeded with protocols similar to those used for our major burn patients. We used silver sulfadiazine for the adult patient. This topical antimicrobial was the first choice at the time when we treated this patient as it has a broad spectrum and was easy to find and use. For the more recent case (the pediatric patient), there were more options, and we used both silver sulfadiazine and the hydrofiber wound dressing with silver (Aquacel Ag). These allowed control of the high fluid loss from the wounds, and it rapidly generated a sufficient concentration of free silver ions, providing long-term antimicrobial activity. With use of silver-loaded hydrofiber, the number of painful wound dressing changes decreased without serious adverse effects. However, hydrofiber wound dressings could make it difficult to observe the wound conditions frequently; therefore, we preferred to check the wounds at least every 2 to 3 days, unless there were excess amounts of wound fluid and dressings needed to be removed.

Some consider the use of steroids as life-saving,8,9 while others have reported no beneficial effects and an increase in mortality. The use of combined IVIG and systemic corticosteroids is still controversial in treatment of TEN. Patients who were already on high-dose steroids have developed TEN.9-11 On the other hand, early infusion of high-dose IVIG could stop mucosal and skin detachment and allow a significant reduction in mortality. Both of our patients received these treatment options, resulting in improved outcomes compared with those predicted by the SCORTEN scoring system. These agents did not disturb the wound-healing process.

Prompt recognition of conditions, immediate withdrawal of the trigger agent, and an experienced health center providing appropriate treatment play vital roles in reducing mortality in patients with SJS and TEN. Thus, early admission to burn centers is life-saving for patients with SJS and TEN. The multidisciplinary and experienced team work at a burn center, which can provide supportive care, proper wound management, temperature maintenance, and the appropriate nutritional and fluid requirements, is a key aspect to better outcomes. Active surveillance of complications to prevent morbidity and mortality is important; thus, communication with dermatologists, rheumatologists, ophthalmologists, and intensivists is essential. 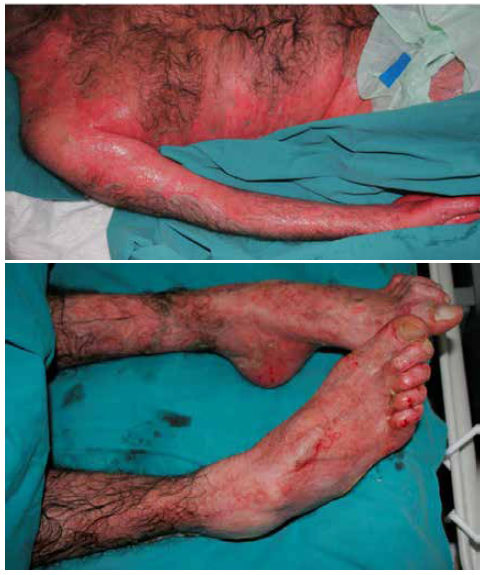 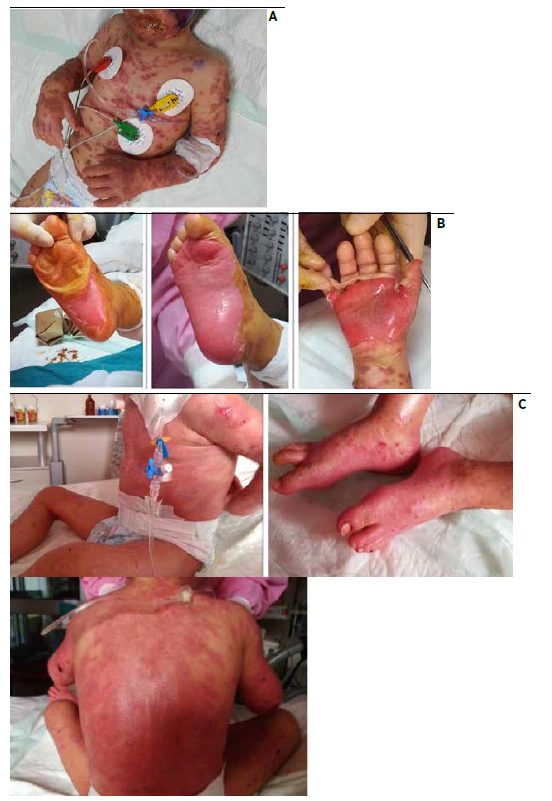 Figure 2. Lesions of Patient 2 in the Acute Phase (A) Lesions Around and in the Oral Cavity and in Hands and Feet (B), and Lesions After Epithelization Was Completed (C)