CASE REPORT
Wilkie Syndrome Is a Rare and Not Frequently Considered Pathology: Report of 2 Cases With Favorable Evolution After Conservative Treatment
Julio Cabrera

Wilkie syndrome, or superior mesenteric artery syndrome, is a rare and not frequently considered complication in burn patients. This clinical entity is caused by compression of the third portion of the duodenum between the abdominal aorta and superior mesenteric artery, leading to duodenal obstruction. It can also be caused by a decrease in retroperitoneal fat in cases of severe malnutrition, as observed in patients with large burns. Here, we report 2 patients with large burns who presented with significant weight loss, accompanied by upper digestive intolerance, vomiting, large volumes of gastric residual, and abdominal pain. The fundamental study for its diagnosis was abdominal computed tomography with aortic angiography, which revealed a decreased angle between the aorta and the superior mesenteric artery. In our patients, treatment consisted of nutrition by nasojejunal catheter in 1 patient, with the other patient also receiving nasojejunal nutrition by catheter after a period of parenteral nutrition. Conservative treatment was successful in both cases, with no need for surgery.

In this report, we present 2 patients with large burns and inhalational injury who were seen at our national burn center. Patient 1 was a 15-year-old female patient, and patient 2 was a 70-year-old male patient. Weights at admission were 74 and 75 kg, respectively.

Patient 1 had thermal injury from a direct fire in a closed environment (house fire), which involved firefighters removing her from the fire. The patient had evidence of grade 3 inhalation injury, burn body surface (BBS) of 82%, anterior and posterior trunk burns, upper limb burns, and lower limb burns with compartment syndrome.

Patient 2 had a high-voltage electrical injury while working. Burns on hands, upper limbs, lower limbs, chest, and abdomen were evident. Computed tomography of the body showed fracture of the right maxillary sinus with blood in it, left pneumothorax, and fracture of a left rib. Analysis showed BBS as 23% deep. Patient 2 had need for orotracheal intubation due to initial deterioration of consciousness, although no lesions were shown on skull tomography.

During care in our burn unit, patient 1 presented with compartment syndrome in lower limbs that required escharotomy and fasciotomy. The patient also had pneumonia associated with early and late ventilation, with compromised hemodynamics. The patient also had 2 episodes of sepsis from infection of the burned areas. Patient 1 underwent a number of surgical interventions plus a balneotherapy procedure, totaling 59 procedures and 36 periods of suspension of enteral nutrition.

Patient 2 underwent escharotomy and fasciotomy of upper limbs at our center for compartment syndrome, had creatinine kinase level of 50 000 IU, and required thoracic drainage due to pneumothorax. The patient was hemodynamically supported with vasopressors. On day 12, the patient achieved extubation and suspension of vasopressors. However, patient 2 then presented with infection of the soft tissues from a multiresistant germ, with improvement after treatment with antibiotics.

Both patients developed similar symptoms between 40 and 90 days after the injury occurred, which included pain, nausea, vomiting, increased gastric residuals, and anorexia. Neither patient had a premorbid history.

Radiography scans of the abdomen showed distended stomach with liquid and gas. Computed tomography (CT) angiography scans with contrast in both patients showed a decrease in the angle between the aorta and the superior mesenteric artery, which was 22 degrees for patient 1 and 24 degrees for patient 2. The distance between the aorta and the superior mesenteric was 6 and 8 mm, respectively. In both cases, compression of the duodenum was found, being greater in the first case.

Both patients required fibrogastroendoscopy, which confirmed extrinsic compression of the duodenum in the third portion. In patient 1, this information was useful for placement of the nasojejunal tube with the help of biopsy forceps. Transpyloric jejunal feeding beyond the point of obstruction (through a gastrojejunostomy tube or nasojejunal tube) was effective in both patients.

Both patients had complete recovery, with patient 1 and patient 2 having to maintain nasojejunal tube feeding for 13 days and 15 days, respectively. Patient 1 also required parenteral feeding during the first 7 days. Patient 2 tolerated oral feeding after 2 weeks. In both cases, a progressive increase in weight was shown, with good subsequent evolution.

Wilkie syndrome, or superior mesenteric artery syndrome (SMAS), is a rare and not frequently considered complication in burn patients. Superior mesenteric artery syndrome was first described by Von Rokitansky in 1842, and later Wilkie provided a more detailed clinical and pathophysiological description in a series of 64 patients and suggested treatment approaches.1,2

The mass of fatty and lymphatic tissue around the origin of the superior mesenteric artery provides adequate protection to the duodenum against compression. However, if a patient loses weight rapidly, as occurs in patients with large burns, there is a decrease in the angle between the superior mesenteric artery and the aorta from the normal angle, resulting in occlusion of the third part of the duodenum. One of the consequences of the upright posture in humans is that the superior mesenteric artery exits the aorta at an acute downward angle, rather than at an almost complete right angle, as shown in quadrupeds. In large burn patients who spend long periods in the supine position, an opposite situation occurs that can favor the reduction of the angle. This may explain that the prone position often improves the symptoms.

Patients with SMAS may present with an acute obstruction or may have an insidious onset with chronic symptoms.5 The diagnosis requires a high degree of suspicion.6

The fundamental cause of this syndrome is the loss of adipose tissue that surrounds the mesenteric artery, and its etiologies include cachexia of any origin, including burns as a cause.9

Plain abdominal radiography can show gastric dilation. However, CT has demonstrated efficacy in the diagnosis of SMAS, as these scans can show the characteristic duodenal and gastric distention and the upper part of the mesenteric vessels and the angle it forms with the aorta. The advantages of CT scans include that it is a safe, fast, and relatively noninvasive technique (Figure 1).

The use of fibroendogastroscopy may show a reduction of the lumen of the duodenum in its passage below the mesenteric artery as an extrinsic compression. It is useful for the passage of the nasojejunal tube when it does not advance spontaneously, with help with biopsy forceps, as occurred for our patient 1.

Conservative therapy consists of achieving weight gain orally, enterally, or parenterally, with the intention to restore the mesenteric fat pad and increase the aortomesenteric angle. Feeding in lateral decubitus or prone feeding can be achieved with a nasojejunal tube distal to the Treitz ligament, which we can corroborate via abdominal radiography, with the distal end of the tube located on the left side of the spine at the level of the lumbar vertebrae (Figure 2).

Catabolic or malnutrition states are a predisposing factor due to the reduction of retroperitoneal fat; because of their high metabolic demand, burn patients frequently present with these factors.

In burn patients, SMAS may occur in those with burn involvement of greater than 30% of the body surface. Most patients described are tall and weigh between 54.5 and 87 kg and have prolonged immobility in the supine position.10 In most patients with large burns in whom the decrease in retroperitoneal fat is mainly due to a severe state of hypermetabolism and hypercatabolism, conservative treatment seems to be the noninvasive solution as described in this report. When the obstruction cannot be relieved by this therapeutic option, surgical treatment should be considered. Patients with acute syndrome often respond to conservative treatment (decompression, correction of dehydration and electrolyte imbalance, and nutrition support). Most patients with chronic syndrome require surgical intervention.

Superior mesenteric artery syndrome is a rare and rarely considered complication that can lead to severe complications. We presented 2 patients who were seen at our National Burn Center, in which a severe decrease in body weight was associated with abdominal pain. Upper digestive intolerance was diagnosed, with diagnosis confirmed by abdominal tomography and angiography. Both patients received conservative treatment and had favorable evolutions. If noninvasive conservative treatment fails, a surgical solution would be indicated.

From the National Burn Center, Clinic Hospital, University of the Republic, Montevideo, Uruguay

ACKNOWLEDGEMENTS: The author has not received any funding or grants in support of the presented research or for the preparation of this work and has no declarations of potential conflicts of interest. 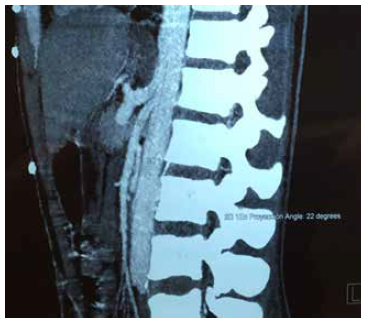 FIGURE 2. Simple Abdominal Radiography Showing End of Probe Distal to Ligament of Treitz (seen on left side of spine)