OBJECTIVES: Population, gross domestic product, life expectancy, and public spending on health in Chile have significantly changed over the past few decades. However, as of 2004, the fatality rate among major burn patients had remained constant at 76%. In this study, events that have affected the reduced fatality rates of patients with large burns in Chile over the recent decades were reviewed.

MATERIALS AND METHODS: Publications on fatality rates, the new law that guarantees care for pathologies with the highest burden of disease (GES Law), and official documents on interventions for large burns from the National Reference Center were reviewed. In addition, immediate results, incorporation of large burns to the GES Law and its consequences, emergence of new needs, and creation of new burn units and outcomes were reviewed. Lethality rate was the primary endpoint.

RESULTS: Reasons for persistent high fatality rates have included (1) conservative surgical index protocols designed to classify severity groups as a predictor of survival and (2) the late incorporation (in 2003) of intensive therapy to severe burn treatment. The promulgation of the 2004 Explicit Health Guarantee law, establishment of burn services at the Public Hospital of Urgent Care and National Reference Center in 2005, incorporation of major burns into the GES Law in 2007, and development of new burn units in 2012 have together generated a process that has allowed the fatality rate to be reduced to 6%.

CONCLUSIONS: Changes from conservative treatment to proactive treatment have been of great value. Significant structural and financial support provided by the GES Law has made it possible to offer coverage to patients at major burn units in Chile and to continue to improve the quality of the care. Development of new units has been stimulated through practical learning and through the use of infrastructure and human resources already available.

The health outcomes of a country depend on a number of factors. Among these, the most relevant are demographic, economic, and social conditions, the organization of health care, resources available, scientific technological developments, and clinical management.

Chile is a developing country that has seen significant changes in terms of its number of inhabitants, life expectancy, gross domestic product, and per capita public spending on health over the past few decades (Table 1). Until 2004, the average fatality rate among major burn patients (with more than 20% partial or total thickness burned body surface area) remained constant at 76%.

Our objective was to establish the sequence of events that had an impact on the reduction of the fatality rate of patients with large burns in Chile over the recent decades.

Publications referring to fatality rates, the new law that guarantees care for pathologies with the highest burden of disease (GES Law or Garantía Explícita en Salud in its original Spanish), and official documents that define interventions in the National Reference Center for large burns were reviewed. In addition, immediate results, incorporation of large burns to the GES Law and the consequences, emergence of new needs, and creation of new burn units and their impact were also reviewed. Lethality rate was the primary endpoint.

In Chile, 75% of the population is served by the public health system, with the other 25% using the private system. The systematic care of major burns began in 1969 with the creation of the Burn Service at the Public Hospital of Urgent Care (HUAP or Hospital de Urgencia Asistencias Pública in its original Spanish). Until 2007, there were no burn units available in the private system. However, 2 other units in private hospitals were dedicated to occupational accidents.

Burn patients are still classified according to the Garcés Index,1 which is obtained by adding patient age to burned body surface area percentages multiplied by a factor of 1, 2, or 3 (1 for superficial burns, 2 for partial-thickness burns, and 3 for deep-thickness burns). The Index also distinguishes 5 groups: mild, moderate, severe, critical, and lethal, which are associated with an observed lethality percentage; the latter group is associated with a 99% death rate (Table 2).1

This protocol, from 1975, continued to be cited in various local publications2 until 2003.3 Throughout this period, a conservative surgical protocol was applied to treat major burns in Chile, and the Severity Index was used as a predictor of survival. Moreover, intensive therapy was only incorporated in 2003. The sum of these factors resulted in the persistence of high fatality rates in Chile.

In line with improvements in the country’s economy (reflected in the increase in the average per capita income) and responding to social demands to optimize the use of health resources, a new law4 was approved in 2004. In this law (GES Law), the Chilean State guaranteed the population as a whole the right, opportunity, and financing to access quality care (in both the public and private health systems) for pathologies with the greatest burden of disease and highest health impact.

On the basis of these criteria and Chile’s capacity to resolve each type of pathology, 23 pathologies were initially incorporated into this guarantee5; however, major burns were not included. Although extensive burns have a high health impact, their high fatality rate at the time did not guarantee the government’s capacity to resolve these cases. In this context, the health authority intervened in the HUAP burn services, the leadership was changed, and a plan to improve the quality of care was initiated6 with the objective of reducing the fatality rate, which was used as the primary indicator of results. However, no additional resources were available.

The therapeutic protocol was modified from an expectant conservative approach to a proactive one, which included 3 characterizations. (1) First, the protocol included protection of viable keratinocytes in superficial dermal burns, with early excision and immediate coverage with an autograft, homograft, or heterograft for deep dermal and full-thickness skin. (2) Second, the protocol included integrated clinical-surgical treatment, with rational use of antibiotics, epidemiological surveillance of infections associated with health care, and selection of cost-effective materials and supplies. (3) Third, the protocol included systematic prospective analysis of experience and communication of results, including review of specific relevant problems such as inhalation injury,7 high voltage electrical burns,8 amputations in cases of large burns,9 and elderly care.10,11

After the first year of protocol modification, an evaluation showed a 50% reduction in the original 76% fatality rate.12 These results increased the care resolution capacity, making it possible to incorporate large burns as Item 55 in the Explicit Health Guarantee (GES Law) program in 2007.13 To help guarantee the quality of care provided, the Clinical Guide was established.14 Joining the GES made it possible to ensure the continuity of resources and modernization of the HUAP burn services, which became the Public Health System National Reference Center for major burns.

However, the private system, which had used the public system results as a reference standard, still did not have a burn center. Nonetheless, they were also able to facilitate the survival of patients with more serious or more extensive burns, as well as older patients.15 The improved survival rates prolonged patient hospital stays, leading to a relative shortage of intensive care beds for burn patients. This scenario meant that agreements had to be established between the public and private systems to respond to these new needs.

When these changes were first implemented in 2007 at the INDISA Clinic, care was provided in the Multipurpose Critical Patient Unit by regular staff who had no experience in treating burns. We then joined them as a surgical team with the goal of replicating the National Reference Center protocol to obtain similar results (Figure 1). Dissemination of our results led private health insurance companies to also start referring their patients to us, which increased the demand for hospitalization. In 2012, when we reached 60 hospitalized patients per year, a specific Critical Patient Unit for Major Burns with 10 beds was installed, which allowed us to build a stable, trained, multiprofessional team. Consolidation of the team was reflected in improved patient survival rates for all burn severity groups. These changes allowed the average combined fatality rate for all burn patients to drop to 6% (Table 3 and Figure 2).

The persistence of high fatality rates in major burn units, despite scientific and technological developments and progress in economic and sanitary conditions in Chile, may be the result of the sum of 3 factors: (1) application of the Garcés Index, which was originally intended only to classify patients according to their severity as a predictor of survival; (2) use of a conservative surgical therapeutic protocol; and (3) late incorporation of intensive therapy.

Improvements in clinical management, including a change from a conservative therapeutic protocol to a proactive one, integration of clinical-surgical teams, and epidemiological surveillance, allowed us to improve the results without adding additional resources. The GES Law was decisive in supporting progress in the treatment of major burns in Chile. Moreover, systematic prospective registration and analysis of the results and focusing our clinical research on factors with the highest incidence for each severity allowed us to learn from our own experiences and to replicate our results in new units. We were able to treat large burns in multipurpose Critical Patient Units without a decline in results.

However, the improvements in survival have created new challenges. Among them, prolonged hospital stays by a greater number of patients meant that more critical care beds were required. By incorporating an expert in the standard burn treatment team, it was possible to train professionals in practice, allowing them to learn from experience, thereby progressively developing a new burn unit.

In our experience, improvements of individual and country-wide health outcomes depend on both proactive clinical management that prospectively evaluates results and public policies that ensure and guarantee support for such management.

ACKNOWLEDGEMENTS: Jorge Villegas is the former head of the Burns Service, National Reference Centre, Santiago, Chile. The author has not received any funding or grants in support of the presented research or for the preparation of this work and has no declarations of potential conflicts of interest.

TABLE 1. Effects of Population, Life Expectancy, Gross Domestic Product, and Public Expenditure on Health Changes in Chile Between 1980 and 2019

TABLE 2. Mortality by Severity Groups According to Garcés's Severity Index for Burn Patients1 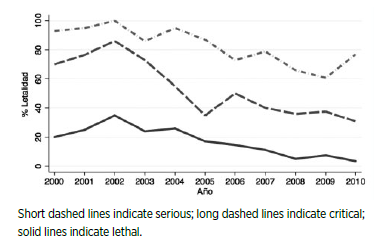 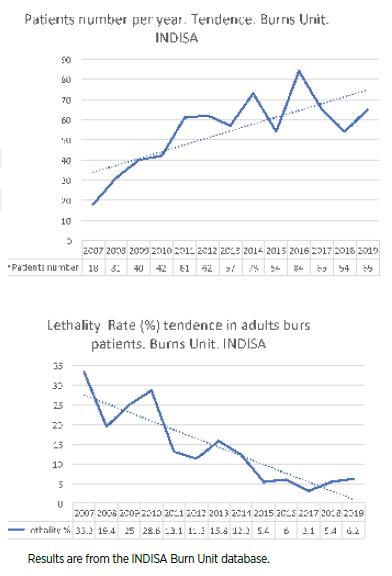