OBJECTIVES: In this report, we evaluated the results of the use of the Meek micrografting technique in the treatment of extensive burns in which classic repair methods were insufficient, using percent mortality as an indicator of outcome.
MATERIALS AND METHODS: Our study included 23 patients among a total of 282 patients with large burns who were treated between January 2015 and February 2021. Age, etiology, percentage of burned body surface, severity group, and percentage of survival were analyzed.
RESULTS: Of 282 patients seen during the study period, 23 patients (8%) were treated with the Meek technique. The mean age was 47.2 years, with a range of 15 to 85 years; 13% were over 61 years of age; 91.3% had been burned by fire, and 47% also presented with inhalation injury. The burned body surface area was between 17% and 93% (mean of 58.14%), with 78% of patients treated with the Meek technique having the highest severity burns. The overall survival rate was 95.65%. Those with and without inhalation injury had similar results.
CONCLUSIONS: The incorporation of the Meek technique provided us with an effective additional tool for treatment of burns. Use of the Meek technique also allowed us to reduce the need for additional donor area, thus allowing us to be less surgically aggressive.

INTRODUCTION
Given the complexity of large burn injuries and the wide range of resources involved in their treatment, it is difficult to analyze the effect of each tool as an isolated factor. In Chile, the Garcés index1,2 has been used for more than 4 decades to establish the severity of burns in patients. This indicator is the sum of age and the percentages of body surface area with superficial, intermediate, and deep burns multiplied by a factor that is determined according to the burn depth. This allows patients to be classified into mild, moderate, severe, critical, and exceptional survival groups based on their probability of survival, with each group being associated with a specific mean percentage of mortality. This percentage is the best indicator to evaluate the global results of each intervention.

In recent years, survival rates for patients with large burns in Chile have significantly improved,3,4,5 with older patients or those with more severe or extensive burns now more likely to survive.5 Longer survival can also result in new challenges in treatment. For burns smaller than 50% to 60% of the total body surface area, the repair is performed using skin expansion with mesh grafts (Figure 1) obtained using a Tanner-Vandeput mesh.6 However, for more extensive burns, other resources are needed; the first potential tool is the culture of keratinocytes (which has not yet been developed in our country) and the second is the use of stamped micrografts. We have occasionally employed handcrafted stamped micrografts.7 To systematically apply this technique, we have incorporated the Meek approach (Figure 2, Figure 3, and Figure 4).

The Meek technique was proposed by Cicero Parker Meek in 1958, but it was not widely known and was little used at the time, mainly because mesh grafts were easy, cost-effective, and time efficient. In 1993, the Kreis modification7,8,9 simplified the Meek procedure, thereby facilitating its application. Thus, this technique is now indicated in patients who have large percentage of burned body surface area and who have scarce availability of donor sites.9,10 Indeed, the literature has indicated that the modified Meek technique can produce better coverage, require fewer surgical interventions, involve shorter hospital stays,10,11 and improve survival, healing, and functional results.12 Other reports have shown that graft survival rate is higher when using this approach and that this approach has a lower overall cost.13

Since the opening of a specialized treatment center for large burns at the INDISA Clinic in Chile, mortality at the clinic has been reduced from 33.7% in 2007 to 6% in 2020. In 2014, mortality at the clinic was 12.3%. With longer survival of patients with insufficient donor skin area availability for the use of a mesh graft, we thus incorporated the Meek technique for those with more extensive burns. In this study, we evaluated patients seen between January 2015 and February 2021 with the objective of evaluating the survival of patients with large burns in which the Meek technique had been applied.

MATERIALS AND METHODS
Design and participants
This was a retrospective, observational, descriptive study. Data were collected for patients who were older than 15 years of age; who had major burns; who were designated as severe, critical, or exceptional survival per the Garcés severity index; who had been hospitalized in the INDISA Clinic from January 2015 to February 2021; and who had been treated with the Meek graft technique. We used patient survival as a result indicator. Patients were independently grouped according to age, burn etiology, presence of an inhalation injury, Garcés severity index designation, percentage of burned body surface area, and overall mortality.

Medical information was obtained from a health care database generated by the team at the INDISA Clinic treatment center for major burns, whose members, in turn, also formed part of the present research team. This database has been prospectively prepared since 2015 and contains clinical records of patients treated during the intervening period. This study was a descriptive analysis of the variables of interest.

Ethical considerations
This work was approved by the Scientific Ethics Committee of Clínica INDISA, which is accredited by the Ministry of Health of Chile; because this was a retrospective analyses, informed consent was not required.

DISCUSSION
Incorporation of the Meek technique provided us with an effective resource to address the repair of skin coverage in our patients with surface area burns exceeding 50% of their bodies. The use of this technique allowed us to increase the probability of survival of patients who may have been severely compromised if they had been treated with traditional resources. The results were similar in the groups with and without inhalation injury, which led us to suggest that the main severity factor was the extension and depth of the skin burns rather than the inhalation injury in these cases. In addition, the use of the Meek technique in elderly patients allowed us to reduce the need for additional donor area, thus allowing us to be less surgically aggressive. 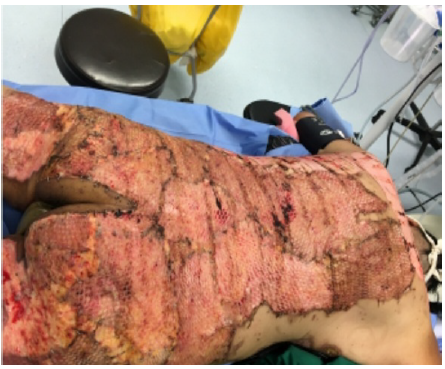 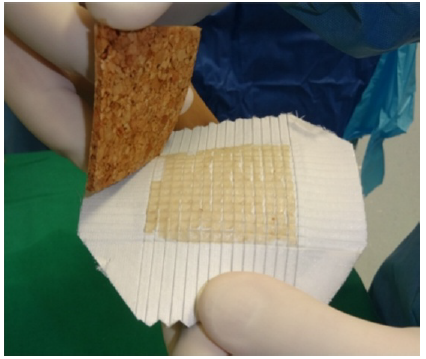 Figure 2. Skin Micrografts Made With the Meek Technique 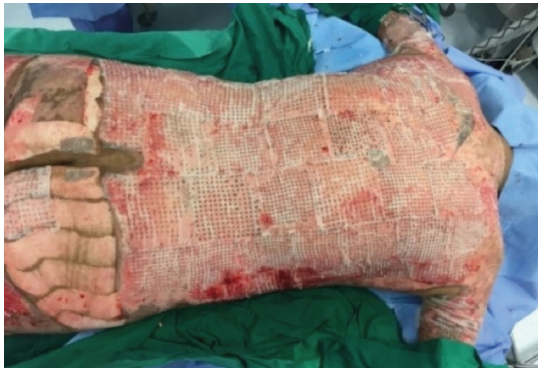 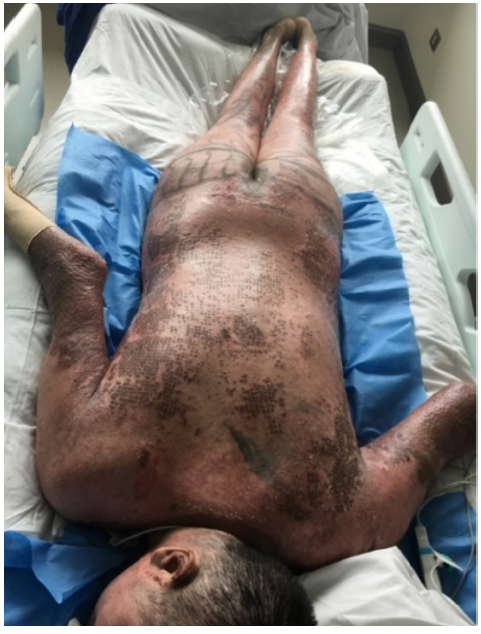 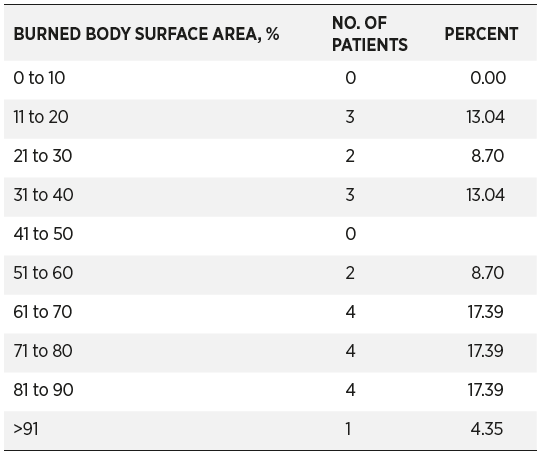 Table 2. Patients Treated With the Meek Technique According to Severity 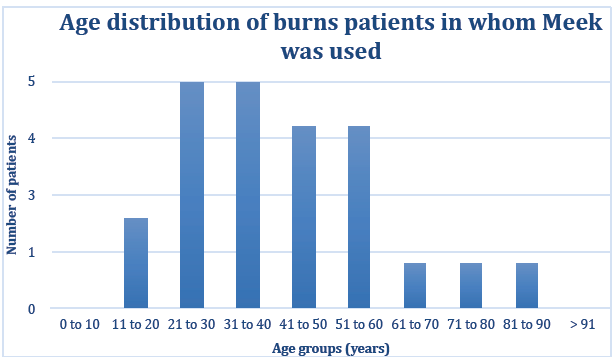 Figure 5. Age Distribution Among Patients Who Received the Meek Technique 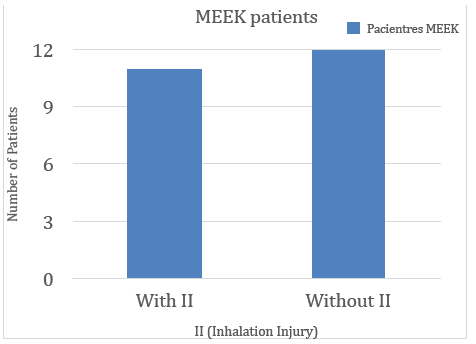 Figure 6. Patients Treated With the Meek Technique With Inhalation Injury