A 48-year-old previously healthy man working as a construction worker had bought ready-mixed concrete for his household repair. While working, he had stepped on ready-mixed concrete to spread it with his boots on, and some amount of ready-mixed concrete had poured in his boots. The patient had not cared about it at the beginning; however, after he had felt increased heat in his feet, he removed his boots. While washing his feet with tap water, he noticed redness and itching on his feet. The next day, he presented to our hospital’s burn unit due to darkening of the redness and new-onset pain. On physical examination, he had third-degree burns in a circular-pattern in both lower extremities below the knees involving the ankles; he also had similar burns affecting the dorsal aspect of both feet extending to the toes (Figure 1). The patient had no comorbidities in his medical history.

The patient was admitted to our burn intensive care unit (Ankara, Turkey) for treatment. His care including daily dressings and 2 debridement procedures. On day 10 after the burn incident, after granulation tissue was formed, the defects were closed with a split-thickness skin graft taken from the thigh region (Figure 1D). The patient was discharged uneventfully.

Although burns usually occur as a result of preventable causes in the household, there also exist some burn types that occur due to extremely rare causes.2 Burns due to chemical causes are rare, and their treatments are less known. This reported case was our first ready-mixed concrete burn case treated at our burn unit.

According to the manufacturers’ statements, the main problem is that factories producing ready-mixed concrete add various chemicals into it to increase its liquidity, promote rapid freezing, and prevent it from being affected by cold. It is stated that addition of these chemicals may augment its effects on skin.

Contact burns with ready-mixed concrete are usually seen in lower extremities, knees, hands, and fingers. The total burn area is usually not extensive, ranging from 5% to 15%.1 In the present case, the patient had third-degree burns in both lower extremities, affecting a total area of 10%. As stated in the literature, excision and grafting are performed in more than 75% of reported cases due to the full-thickness nature of ready-mixed concrete contact burns. The literature has also reported that, compared with other burn types, a need for a longer hospital stay and regrafting may appear in this type of burn.1,2 In our case, we similarly performed excision and grafting, and the patient did not need regrafting. More than half of individuals exposed to this type of burn have no knowledge of the ready-mixed concrete’s burn risk and thus take no protective measures. The construction sector in Turkey is highly active. Therefore, it seems that ready-mixed concrete manufacturers should provide consumers with more clear precautions and information about the possible risks involved. We believe that the use of protective gears and taking necessary measures can prevent such burns in both professional and nonprofessional users of these materials.

From the Department of General Surgery and Burn and Fire Disasters Institute, Baskent University Faculty of Medicine, Ankara, Turkey

ACKNOWLEDGEMENTS: The authors have not received any funding or grants in support of the presented research or for the preparation of this work and have no declarations of potential conflicts of interest. 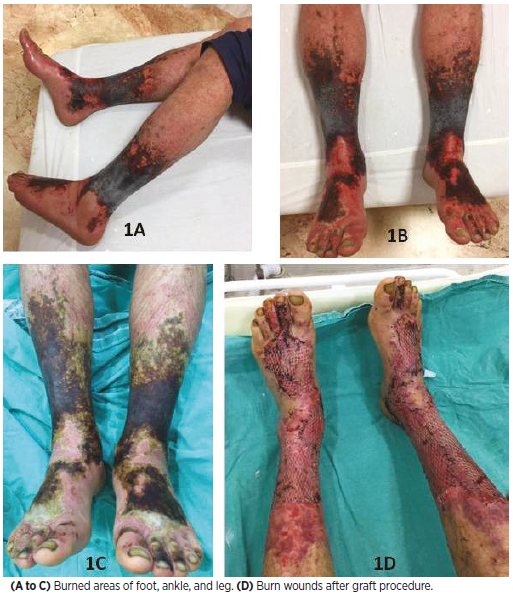