MATERIALS AND METHODS: Between 2017 and 2020, our center performed 25 pedicled perforator flap procedures in 20 patients (17 men/3 women) for burn injury reconstruction. Of the 25 total pedicled perforator flaps, 4 were utilized for acute defects and 21 were performed during the late phase of injury. In the acute phase, the main indication was to cover exposed vessels. In the late phase, 16 of the 21 flaps were used to cover defects (burn scar contracture release in axilla, neck, popliteal, and antecubital region), 2 were used to cover pressure ulcers due to prolonged hospitalization, and 2 were used for persistent defects in the extremities.

Early tangential excision and skin grafting are widely accepted treatment methods for acute burns.1 Flap surgery is needed when skin grafting cannot be performed, such as the exposition of musculoskeletal or neurovascular structures in acute burns. In the late phase of burn trauma, flaps are used to reconstruct burn-related complications, such as contractures, hypertrophic scars, and Marjolin ulcers. Although the use of local flaps elevated near the burn injury zone is considered reliable according to experimental studies, the chance for successful reconstruction with healthy tissue is greater with perforator flaps.2 The perforator artery anatomy has been well described in various anatomic locations. Perforator flaps are fed by these perforator arteries, which arise from muscle fascia or intermuscular septum. Every perforator has a vascular territory, which allows perforator flaps to have consistent circulation.3 Thus, they can be used as a pedicled or free flap. A pedicled perforator flap (PPF) can be designed according to the perforator location and its distance to the defect. The flap has advancement and rotational movement after being islanded and dissected from all the attachments expect the vascular pedicle.4 The technique gives surgeons the opportunity to transfer healthy tissue to a defect without sacrificing the muscle or an axial artery. In the literature, the use of perforator flaps in burn reconstruction have mainly focused on late-phase reconstruction with free flaps and PPFs. Descriptions of the versatility of PPFs in acute burns are limited. Here, we present our experience with PPFs and discuss their role in different phases of burn reconstruction.

The study was a retrospective, case-control study based on the data collected from the Baskent University Burn Unit database between 2017 and 2020. Helsinki Declaration principles were followed during the study. Inclusion criteria were PPF reconstructions within the first year of burn injury. Reconstructions that occurred 1 year after burn trauma were excluded from the study.

Over our study period, 25 pedicled perforator flaps were performed in 20 patients (17 male and 3 female patients) for the reconstruction of burn injuries. Two groups were formed according to timing of operation: acute and late phase. Patients who had PPF procedures during the first 21 days of burn injury were included in the acute burn group. Patients who had PPF procedures between 21 days after burn trauma to 1 year after burn trauma were included in the late-phase group. Patient characteristics such as age, sex, and comorbidities were noted. Burn injury-related parameters, such as total body burn surface and anatomic location of burn, type of burn, and reconstruction-related parameters, such as flap selection, pedicle name, rotation arc, and complications, were noted (Table 1).

Surgical technique
The perforator arteries around the defect were preoperatively or intraoperatively marked with 8-Hz Hand Doppler device (Hadeco). A rotation arc of 90 degrees was frequently proposed. However, flap directions were designed according to skin quality around the defect. The length of the flap was calculated with perforator artery to defect distance and rotation arc of the flap (Figure 1).The width of the flap was determined by laxity of the donor site. Primary closure of the donor site was intended whenever possible. Subfascial elevations were performed rapidly with Colorado needle cautery, until the perforator pedicle zone was reached. Perforators were carefully isolated and dissected with ×3.5 Loupe magnification. Perforator dissection was carried out intramuscularly, and intramuscular branches were clipped for isolation of the pedicle. The dissection was ended until the flap was fully mobilized and reached the defect without tension. Negative pressure suction drains were placed under the flap and the donor site. Skin grafting was performed at the donor site in cases of excessive tension.

Average age of patients was 34 years (range, 28-62 years). Our success rate with PPFs was 88%, with 2 total losses (1 transverse cervical artery perforator flap, 1 superior epigastric artery perforator flap) and 1 partial necrosis (superior gluteal artery perforator flap). All 3 of these were encountered in late-phase use of flaps with 180-degree rotation arc. Four of 25 flaps were utilized for acute defects, with the main indication being to cover exposed vessels. For the acute phase, 3 anterolateral thigh flaps and 1 ulnar artery perforator flap were performed for reconstruction of medial thigh and inguinal and elbow defects (Figure 2).

Of 25 total PPFs, 20 were performed in the late phase of the injury. Sixteen of 20 flaps were used to cover defects of burn scar contracture release in axilla, neck, popliteal, and antecubital region in the chronic phase. Ten thoracodorsal artery perforator flaps were elevated for axillary contractures (Figure 3). Six supraclavicular artery PPF procedures were performed for anterior neck contractures. Two patients required procedures for pressure ulcers due to prolonged hospitalization with superior gluteal artery PPFs (Figure 4). The distribution of the PPFs according to timing of reconstruction is shown in Table 2.

Perforator flaps have been popularized over the past 20 years in reconstruction of defects in various anatomic sites.5 Perforator flaps based on arteries raised from muscles and intermuscular septum are generally protected in burn injuries. Thus, PPFs are considered more reliable than conventional flaps in burn reconstruction. The role of PPF can change according to the timing of the injury. In the acute phase of the injury (first 21 days), PPFs are used to cover exposed neurovascular and musculoskeletal systems. In the late phase (after 21 days), PPFs are used to correct burn-related complications, such as contractures and persistent defects.

In our study, the rate of PPF use for acute burns was 16%. There are several possible explanations for this. First, early tangential excision and skin grafting continue to be the primary treatment options in our institution. Second, waiting for demarcation and avoiding aggressive debridement over the neurovascular structures are our other principles with regard to burn reconstruction. In our study, the most common indication was exposed neurovascular structures. We encountered vessel exposition in 2 cases during eschar debridement. In 1 case, we covered exposed saphenous vein and nerve with an anterolateral thigh flap.

Descriptions on the use of PPFs are limited in the literature. In their series, Teven and colleagues performed 6 PPF procedures during the first 21 days of injury.6 Indications for use of PPFs in their series included exposed tendons and joints of the hand.

In our late-phase group, the most common indication included premature burn contractures. Although we routinely referred our patients to physical therapy after discharge from the burn unit, some patients could not attend the treatment due to socioeconomic reasons and thus developed premature contracture. Careful patient evaluations are needed to manage premature contractures. Grafted areas are not considered reliable for undermined flaps such as Z plasty up to 6 months after burn injury.7 Flap necrosis is not rare when it is performed earlier. In this scenario, subcutaneous pedicled flaps or perforator flaps from uninjured areas have been used for contracture release.8,9 Among the cases in our series, we reconstructed axillary contractures with thoracodorsal artery perforator flaps. This flap procedure allows a large skin island without any sacrifices to the muscles and nerves. Alternative flaps to thoracodorsal artery perforator flaps are scapular and parascapular flaps, but the risk of concomitant burn injury in these areas is higher than in the thoracodorsal region.10 Thoracodorsal artery perforator flaps are considered a workhorse flap for axillary and antecubital contracture release and anterolateral thorax defects in many centers.11,12 The second common region in our series involved anterior neck contractures. We used supraclavicular artery perforator flaps, which provided sufficient tissue without significant morbidity compared with other alternatives such as free flaps or myocutaneous flaps.13,14 We also performed PPFs for pressure ulcer coverage due to prolonged hospitalization in 2 cases. This involved reconstruction of sacral pressure sores for 2 patients with electric burns with a superior gluteal artery perforator flap.

There are some advantages of PPFs in burns. This technique allows the surgeon to transfer healthy tissue far from the injury zone. Because of this advantage, PPFs can be performed during the acute burn injury period; however, the fate of local flaps is unpredictable. Pedicled perforator flaps are good options for patients who develop premature scar contractures, as shown in our series. Perforator flaps are regional flaps and provide excellent tissue match, resulting in lesser disturbing scars. The super-thin elevation of PPFs has been shown to have better aesthetic results in burn scar reconstruction.15 Skin islands are wider than conventional flaps but limited when compared with skin grafting. Expansion of PPFs can be considered when a large skin island is needed.16 Another described method for elevating a large skin island is supercharging the flap vessels with recipient site.17 This technique can increase nourishment to the skin island and decrease skin necrosis.

Primary closure of the donor site is the well-known advantage of PPFs. However, skin loses its laxity in deep-degree burns, and the flap donor site may not be closed primarily in some cases. Skin grafting over the muscle might be a solution rather than elevation of a second flap. We could not close the flap donor site primarily because of burn scar and edema in 2 patients. Split thickness skin grafting were performed for closure of the donor site. The complication that we encountered included severe venous congestion in 2 flaps, which resulted in total necrosis. Total skeletonization of the pedicle and protecting the pedicle from external pressure are recommended in cases with 180-degree rotation angle.18 The disadvantages of PPFs in burn reconstruction are related to technical issues, such as operative instruments and surgeon experience.19 Defining the location of the PPF requires preoperative imaging, such as computer tomography angiography and Doppler ultrasonography. Dissection of the pedicle requires fine microsurgical instruments and magnification. The technique has a long learning curve, and anatomy knowledge is mandatory.

Pedicled perforator flaps can be used as a reconstructive option in acute and late phases of burn injury for coverage of neurovascular structures and correction of premature scar contractures.

ACKNOWLEDGEMENTS: The authors have not received any funding or grants in support of the presented research or for the preparation of this work and have no declarations of potential conflicts of interest 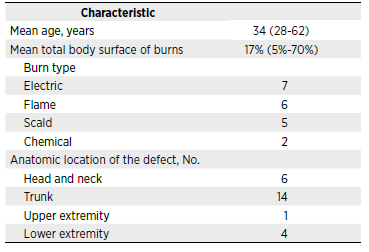 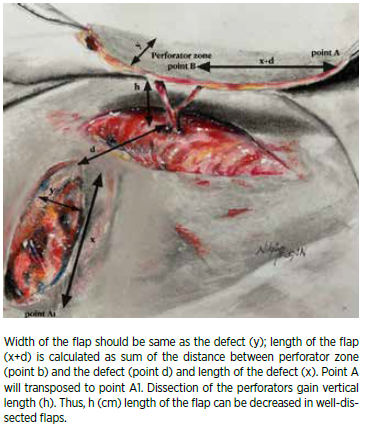 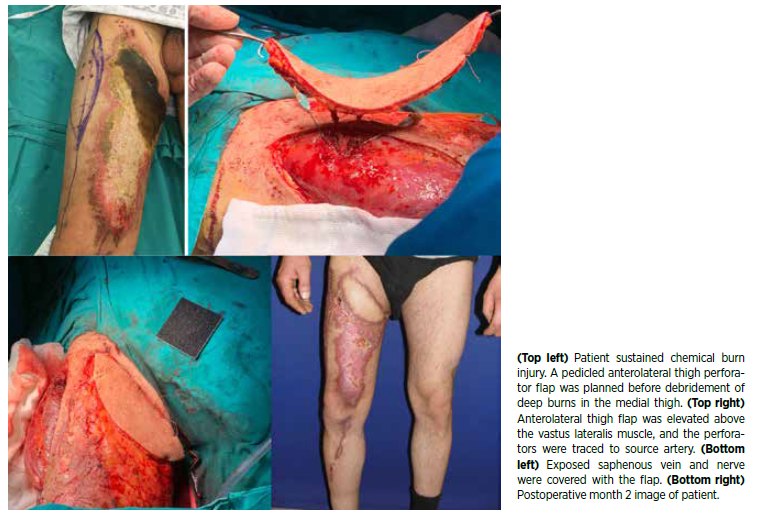 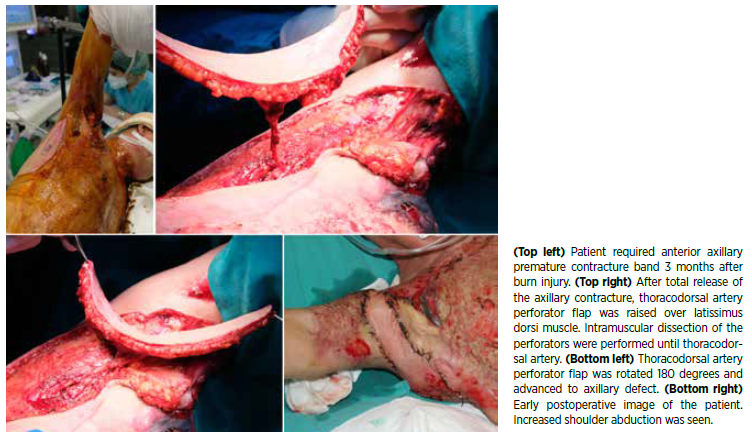 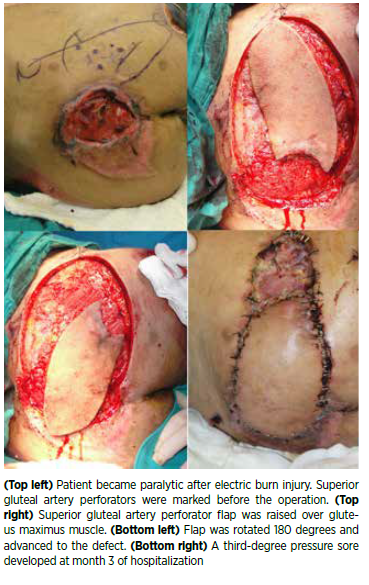 TABLE 2. Distribution of Flaps Performed According to Time of Burn Injury